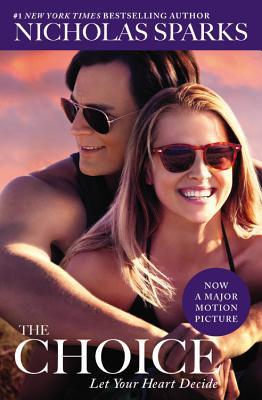 Travis Parker has everything a man could want: a good job, loyal friends, even a waterfront home in small-town North Carolina. In full pursuit of the good life – boating, swimming, and barbecues with his close buddies – he holds the vague conviction that a serious relationship would only cramp his style. That is until Gabby Holland moves in next door.

Despite his attempts to be neighborly, the attractive redhead seems to have a grudge against him. Still, Travis can’t stop trying to ingratiate himself with his new neighbor, and his persistent efforts lead them both to the doorsteps of a journey that neither could have foreseen. Spanning the eventful years of young love, marriage, and family. The Choice ultimately confronts us with the most heart-wrenching question of all: How far would you go to keep the hope of love alive?

The Choice, while having the ability to invoke the deep heart clenching emotions that Sparks’ books are known for, it just didn’t do it for me.
//giphy.com/embed/TiMhwVz3rrILS?html5=true

Earlier this week, in a What I’m Reading post, I mentioned that I was having some difficulties keeping my focus on the book. It did take a bit of strong arming to finish it.

However, while I had a few hiccups about the ploy, I did really enjoy reading about the characters. Gabby is a young woman, practically new to the town of Beaufort. She moved to the laid back little town, leaving her life several hours away to be closer to her boyfriend Kevin. Travis is the bachelor next door who ruffles her feathers with his seemingly laid back personality and lifestyle.

I was disappointed with the novel based on the fact that by almost the halfway mark there were only just hints of an underlying romance plot. Then all of the sudden, almost immediately after two days of hanging out together the characters were professing their love for each other. Insta-romance! It kind of burst my bubble a bit.

Though on a good note, I was completely blindsided with part two and the ending. I never would have thought that the prologue was leading up to the incredibly heartbreaking end.

1 thought on “Review | The Choice by Nicholas Sparks”